It has been a delightful few months since I last posted an update! First and foremost, I am excited to share my recent and upcoming adventures in the 400m hurdles. … END_OF_DOCUMENT_TOKEN_TO_BE_REPLACED

It was really cool competing in the stadium last night! The lights made it as bright as day (and as hot) and the seats were surprisingly full. The sound pouring down to the track surface swelled to a movie-worthy roar whenever a Chinese athlete cleared the bar in the men’s high jump, or moved up to lead a middle distance race. I found my eyes flitting all over, from the crowds to the races to the video camera gliding by overhead and the little flock of birds restlessly hanging around the field that probably nested in the walls and whom we were keeping up past their bedtimes. In hindsight, I was likely a little tense and more in an observing mode than an attack mode. I am glad to say I was successful in fully taking in the entire experience, but as is the case with most things, a fine balance must be achieved, and will be achieved come the start of the heptathlon on Friday!

So in lieu of a long jump final tonight, I joined a group of other athletes and went to watch team Canada play basketball. We missed the single “spectator” bus from the athlete’s village so had to carve our own path…turns out we’re pretty much experts at it.

Long jump tonight! Excited to jump but perhaps more excited to see the inside of the stadium!!! Nevermind, more excited to jump. Duh.
We had a team photo taken yesterday (I didn’t add my camera to the mountain of everyone else’s cameras, but will get a copy soon!). Here are a couple shots of the multieventers (we’re so cool): 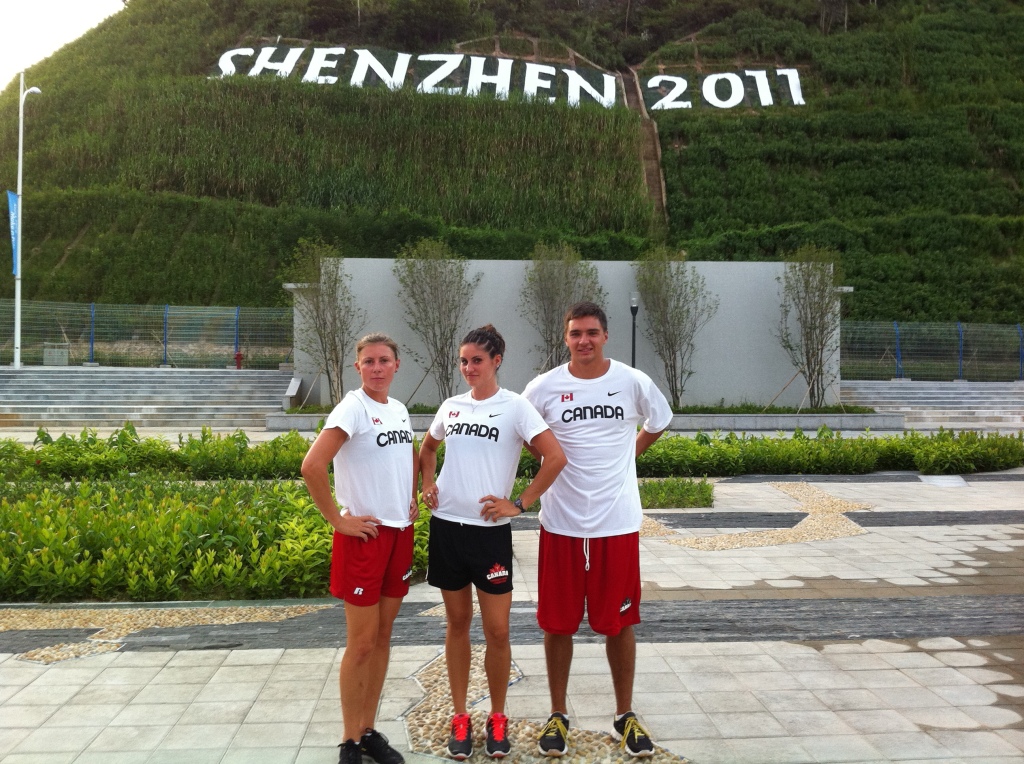 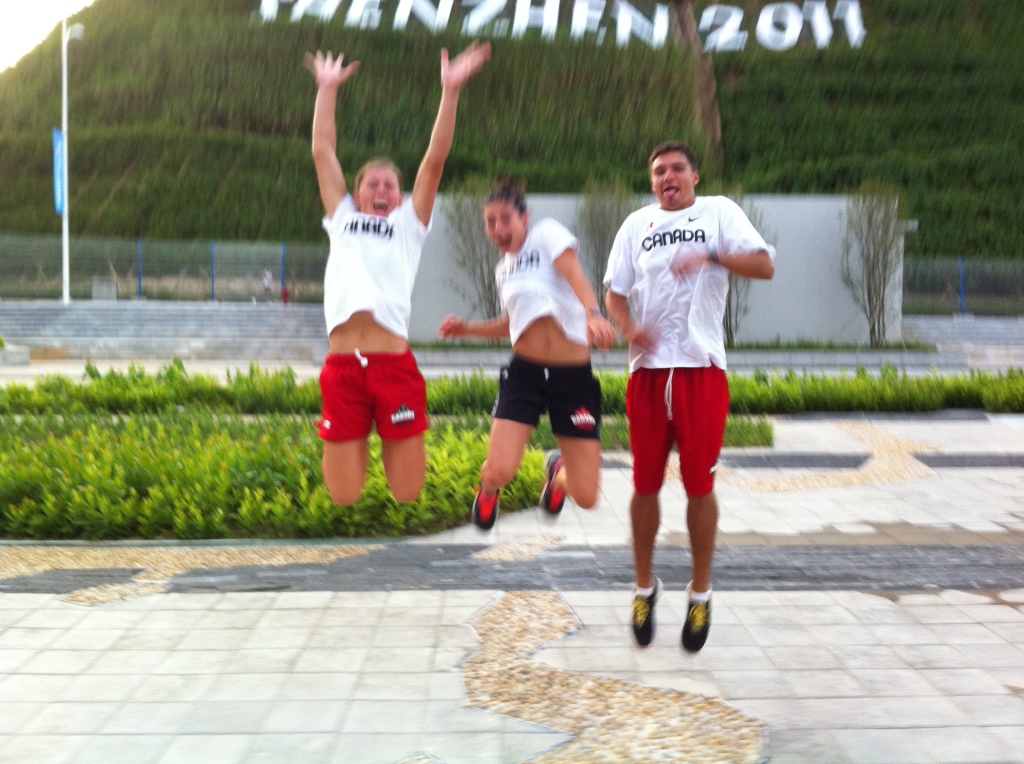 Also, I spoke with a hurdler from Paraguay who’s trip consisted of four flights, TWO of which were 11 hours long. Eeeee. I don’t feel so bad about my mosquito bites anymore…

I hope all is well with you and yours!!!

Standing long jump (also refered to as the standing broad jump) is a two footed jump preferably into a sand pit.  Begin with your toes behind the line designated by the (elementary school) teacher, feet hip width apart, and shoulders square to the direction you intend to jump (into the pit?).

With each pump the excited, anxious smile evolves into a focused grimace.  One pump visibly different from the rest, gets more speed, more forward lean, and a significant push off the track.  Arms extended overhead, feet hanging at the end of legs left behind in the epic push.  A moment of absurd weightlessness is experienced at the apex, when upwards velocity reaches zero, before gravity has a chance to effect acceleration back to the centre of the earth.  For a moment time doesn’t exist…it’s hard to imagine while not in that moment, but it’s as if breathing is not permitted, nor is it necessary.  It’s where your heart and stomach and liver and pancreas feel like they’re in your throat, and thanks to inertia, they very well may be oh so slightly shifted in that direction.

You see, an object in motion remains in motion unless an external unbalanced force acts upon it…in this case, once force is applied to the ground by the body (explained by another of Newton’s laws) the body wants to remain in its upward trajectory.  Yet gravity, an external unbalanced force, acts on the body and the force it generates overcomes the initial force upward.  Yet there is a moment when the forces are perfectly balanced.  Only, I think this moment – experienced by one’s internal motion detectors whatever they are, whether it’s the inner ear or through vision (seeing that you’re not moving up or down) …generally somewhere in the head – is slightly separate from the rest of the body and it’s organs.  So while you experience that you are weightless, maybe it is that your inner ear or eyes are, while the other parts of your body (for instance your heart, stomach, liver and pancreas) may still be in motion upwards and may catch up a little to your head or whatever it is that detects no vertical movement.  Put another way, a car (the body) slows when the brakes are applied but the people and things in it that aren’t rigidly attached (organs) do not slow down immediately.  Anyway, MAJOR tangent…

Your heart, stomach, liver, and pancreas are slightly in your throat, you can’t breathe, and you’re hanging suspended in time and space.  After coming to some great epiphany (unfortunately nearly always forgotten immediately), or seeing your life flash before your eyes, the second-hand slips into the next slot with a classically loud TICK as time resumes, and the sand begins approaching at an alarming rate.  Feet that were still hanging back come kicking through, as the hands come down to meet them, your body folding in half at the hips, two parallel lines that are parallel to the sand pit.  Just before your heels hit the sand, you extend your legs even further, leveraging another 10cms of distance before contact.  Once heels touch down, in an aggressive attempt to fling your centre of gravity beyond that initial depression in the sand, hamstrings fire causing knees to bend and your hips to shoot forward.  Feet fly out of the sand, flinging several grains as they go, and almost simultaneously your bum moves in where your feet were.  Forward momentum continues your movement through the sand and you exit the pit, leaving a massive crater amid a beautifully smooth sandy expanse of desert.

Note: the very first attempt may result in disorientation in this reality.  In most cases this disorientation is temporary, but in extreme cases jumpers have been known to be a little wonky.  In fact, as familiarity with this blog will edify, most track and field events are accompanied by some degree of disorientation.  Interestingly, the heptathlon offers a unique blend of disorientation from each event, usually resulting in a perfectly adjusted and oriented athlete…not peculiar or awkward in any way.

Also: I don’t want to, but I feel the need to mention that a couple of years ago my coach, Vickie, in jeans and dressier shoes, standing long jumped further than I.  A rematch will be held soon and I shall report the results (if I win this time).

One more thing: standing long jump was supposed to be an intro to running long jump, but it is quite a bit more involved than even I imagined!  Crazy, I know.  I think I’ll leave it at that for today!

Thanks for your rapt attention and an exceptional Saturday to you!!